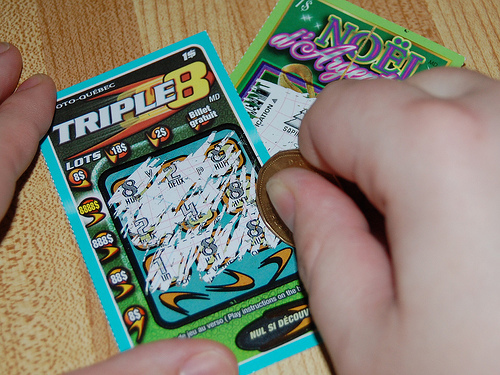 Concept: Give consumers free stuff (on a very consistent basis) and give advertisers more brand engagement. Think woot.com but with free, quality, stuff (or actually even deeply discounted – per the coupon in the win).

That’s the idea in a nutshell. Here are some more details:

This app would be free in the App Store. Naturally, this idea would work best with folks that have existing relationships either with an ad agency (or agencies) or with brands and other advertisers.

The graphics would be holding a simple coin, and you use your real finger to scratch the ticket with the coin.

Game mechanics could be included, so points could be accumulated that users can redeem for some discounts (think Visa, American Express, Airlines, etc. kind of points).

Then, once you have the momentum going you continue to provide small wins for the users even when they don’t ‘win’ a major prize (supplied by a vendor or brand).

The app can even be branded (charge for impressions above the results of the prize, or the prize itself is sponsored by some other brand).

Build functionality to allow users to ‘share points’ with others. Add a social aspect to it, so I can send 1,000 points to my sister so she can do whatever she wants with it.

Integrate it with Facebook Game Developers (like Zynga) where points and ‘tickets’ are hidden in the games – work out some sort of kickback commission with them. This can also be extended to other game platforms – like World of Warcraft, HeyZap, etc.

Implement scavenger hunts for ‘golden tickets’, where each ticket is a guaranteed prize – this comes back to the game mechanics idea earlier.

That’s all I can think of right now, and many people might ask…why don’t I do it. Well, to be honest, I am quite busy right now and I am not a big fan of the advertising model (i.e. working with brands and advertisers…it’s just not my forte. I am not bashing it…just saying it’s not my thing).

Hope this sparks some ideas and someone wants to run with it, that would be awesome. I would definitely download the app (provided it can work on my iPod Touch 2Gen).

You are free to take the idea and run with it. If you do run with it, some credit would be nice

I have some additional ideas on other possibilities, so if you would like me to be involved in any way, feel free to reach out to me. You don’t have to…just saying.