I have been meaning to write this post for a while, but forgot about it until I saw a tweet recently by a friend that reminded me.
Here is an idea for an interesting side-project that I thought I would be able to do, but I have too much on my plate, so I figured I would put it out there for the internets to run with.
Idea: A site that just has a ‘hot’ video - determined by a variety of factors. The site should be simple, and very elegant. Ideally it would just have that one video embedded on each page or rather be the main focus. It can then have many other sections. I will provide details and a back story below.
I never realized that YouTube publishes both the likes & dislikes of videos - see the classic example (below) of Rebecca Black’s ‘Friday’ video (look right below the number of views, that image has 2.7M dislikes). 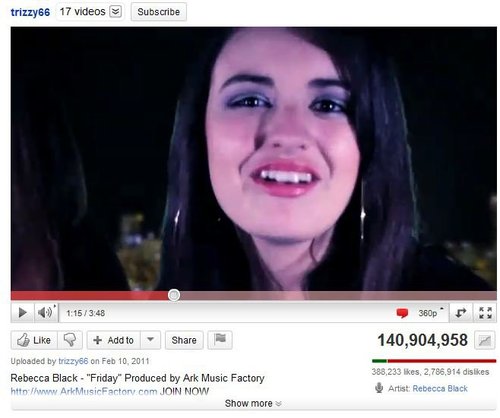 So rather than just doing the ‘most viewed’ videos (although you could have a section that shows that if you would like), the main feature of the site would be the video that is ‘most controversial’. The way you calculate that is the disparity between likes and dislikes and views. Digg used this with their ‘most controversial comment’ and that’s where the idea comes from.
To break out the illustration some more, let’s look at some numbers, you can have different levels of ‘controversial’. If a video has 1 like and 1 dislike and 2 views…well, that’s not controversial yet. If it has 1,000,000 views with 100,00 likes and 0 dislikes, that’s not controversial. But if it has 50,000 views with 20,000 likes & 20,000 dislikes and is adding view numbers at a steady clip, that could be considered controversial.
Also, like Rebecca Black’s video that has 140M views, but 2.7M dislikes, that definitely is controversial. If it is so disliked, why do people like seeing it ? Which pushes up the views and likely pushes up the like-to-dislike ratio, which will likely push up the views and keep the cycle going.
So I would say, you would have a ‘controversy’ factor, where it’s measured 0 to 1, where 0 is not controversial at all, but 1 is perfectly controversial (the Friday video would be perfectly controversial).
So that would be the main section. Then you can add other sections, like ‘Most Liked’, ‘Most Disliked’, ‘Rapidly Gaining’ - where you measure the rate at which the views are increasing along with likes, etc.
That’s it. Nothing too fancy, but could very easily be very viral.
If YouTube had a Ruby API, then I might have considered doing it, but based on the preliminary digging I couldn’t find one, and I don’t have the time to go through figuring out anything else that might cause me to have to do too much learning right now.
I imagine, a site like this could surface some very interesting videos and act like a nice filter of all the stuff put up on YouTube.
If you do find a Ruby API, please let me know in the comments and maybe I might re-consider.
Good luck!
P.S. You can follow me on Twitter here.