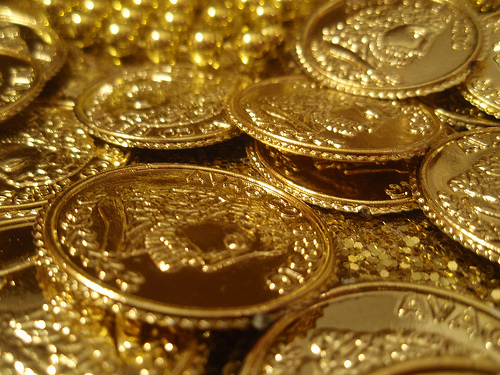 The Wall Street Journal recently had an article about the Fed getting ready to start off-loading the $1.1T worth of mortgages they bought during the crisis (in an attempt to save the banks).

From the article (note, I added emphasis):

At $1.1 trillion in holdings of mortgage debt guaranteed by Fannie Mae, Freddie Mac and Ginnie Mae, the Fed owns roughly a fifth of all these outstanding instruments.

Some Fed officials are pushing for a more aggressive approach. In April, Narayana Kocherlakota, president of the Minneapolis Federal Reserve Bank, called for monthly sales of $15 billion to $25 billion to eliminate the Fed’s mortgage holdings within five years. “It is likely the Fed will have to sell a nontrivial amount of its MBS holdings,” he concluded. Some Fed policy makers—among them Charles Plosser of Philadelphia, Jeffrey Lacker of Richmond and Kevin Warsh at the Fed board—are sympathetic.

At first glance, so much money has been thrown around in the media that 1.1 Trillion Dollars seems like it’s not so big. To put it into perspective, let’s look at some prospective buyers and see how much they would be able to buy and how long they would last:

I know this is a major simplification, it’s just an interesting exercise to look at. Especially in this media climate with hundreds of zeroes thrown all over the place. Also note that I have not included large pension funds, retirement schemes, etc. that typically have very large wads of cash…mainly because those funds tend to be abstract to most people. When you see companies constantly in the news, it’s easier to visualize how big the Fed’s balance sheet is.

Hope that puts it into perspective.

Another thing I have been thinking about lately, is the part of the proposal that will regulate the financial industry (I am pro reform) that creates a ‘bailout kitty’. i.e. the liabilities of large financial institutions will be taxed and stored in this kitty. What I am wondering is this: Where will that money be invested and who will manage it? If they (the managers of said kitty) ‘play it safe’ by investing in sovereign debt, which country’s debt? Won’t that create some perverse incentive for countries to keep running fiscal deficits because they have a literal ‘large pot of gold’ sitting down at their disposal that will allow them to finance any program they want to finance? i.e. moral hazard of the political sort.

Not saying the liabilities shouldn’t be taxed, and the kitty not created…just saying…it might have unintended consequences that are not currently being discussed. However, that might be the subject of another post.