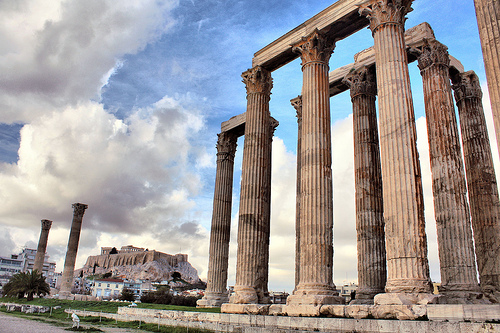 In the first part of this series about the Greece crisis, we looked at the causes of crises in general and some of the elements that led to Greece’s crisis specifically.

The single most important factor in financial markets is confidence. Confidence in everything. From the political system to strength of the local currency to regulators to central bankers. In October 2009, the new Greek Prime Minister shattered market confidence by announcing that several revisions have to be made on their reported numbers (i.e. they have been lying) starting with the budget deficit being double previous estimates @ 12.5% of GDP. As a result of that announcement, which was the absolute right thing for the new Prime Minister to do, the credit ratings agencies downgradedGreece’s debt.

The new Greek government kept dithering about whether or not they need assistance. To further compound the issue, the EU and IMF were back and forth about whether or not they would come to Greece’s rescue. The first version of the bailout plan was only 25 Billion Euros. Even when this was presented, the markets were still not convinced that everything would be ok. EU leaders and the IMF were forced to go back to the drawing board and come up with a more ‘potent’ solution. A $147B bailout package was put together, that seems to have soothed markets fears about Greece’s problems. However, the steep austerity measures demanded by the IMF and the EU didn’t sooth thefears of the Greeks who will have to pay dearly for the years of profligacy by their elected officials.

Just when things were being contained in Greece, S&P downgraded Portugal &Spain’s debt. This causes panic among investors as stock markets all over the world start to decline. The EU is forced back into a corner, and has no choice but to fight. Come out swinging they did. The EU leaders, IMF and the US put together a $1 Trillion bailout package for all troubled Euro nations.

So, in summary…we have seen a small country that first ‘needed’ a $25B bailout, turn into a large $1T bailout for the entire EU (basically). What exciting times we live in. If it is one thing these regulators seem to have learned, it is that fear and uncertainty can spread contagion all over the world in no-time flat. They seem to have tried to get in front of it this time. Although…there are early signs that there are still doubts. Hopefully, this is another crisis diverted.