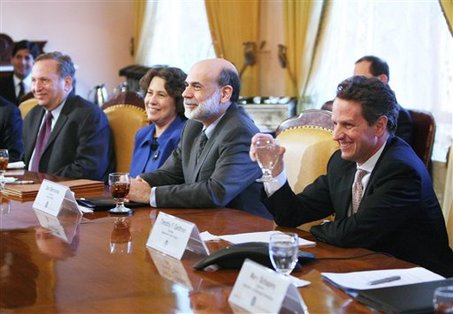 [/caption] The latest craze has been for us to look for someone to blame. Perhaps times are so stressful that people need to vent. Perhaps the problems are so big that someone needs to be villified. Perhaps things are so miserable that we need company. Perhaps. Who knows. But people are getting blamed.  When Henry Paulson was the man @ the wheels of steel, people weren’t too pleased with him. Many have called for the resignation of Timothy Geithner. Others have suggested that even though Larry Summers is a brilliant man, his ideas are worn out/tired. So far President Obama has stated that he would not accept Geithner’s resignation if it were tendered and that he is confident in the competence of his economics team.  Sometimes we have to take a step back from our current situation and try to look at things as objectively as we can. So, to start that process, let’s go back to the beginning. According to the NBER (National Bureau of Economic Research) the recession officially started in December, 2007, we - ‘Joe public’ - never saw the indications of this crisis until March, 2008. Yes, it was years in the making, and there are many things that contributed to it - enough for a series of posts - but the current crisis got a spark in March, 2008 when word started to spread that Bear Stearns had liquidity problems. Then, suddenly, it was announced that JPMorgan was purchasing Bear for an underwhelming $2/share in a deal put together by the Fed & Treasury over the weekend. Shocks were sent through the entire financial system. Hindsight is always 20/20, so now looking back it is easy to see the signs. But in the moment, it wasn’t. Then came Fannie & Freddie, Lehman Brothers, AIG & the restructuring of all investment banks to ‘Bank Holding’ companies, within months of each other. Shortly after that, we had a string of capital injections to many (if not all) of the major banks and other financial institutions.  Then Obama won, and the transition from Paulson to Geithner & Summers began. That’s where the story begins. It’s been exactly 2 months + 1 day since Giethner has been confirmed Secretary of the Treasury. Up until March 10th, 2009 - according to the Washington Post - every single ‘key position’ within the Treasury (aside from Secretary) has remained vacant. Obama appointed three additional people at Treasury on March 23rd, 2009, and there are still positions left to be filled as of this writing. With his skeleton crew, he has done the following: Keep in mind this is all within 2 months. Now I know that there have been bumps along the way, and policies haven’t been rolled out as quickly as people would like them to. But it is imperative that we take a step back and look at what has been accomplished to-date. Whether or not history will look back and give Geithner, Summers & Bernanke all ‘As’ for the way they have handled this crisis is still yet to be seen. But given that the crisis still has not fully played out, and the output of the team so far speaks for itself, I would tend to err on the side of reserving - rather than passing - judgement like current mass hysteria seems to suggest. If I have left out any details, please leave in comments and I will update post.